Today was Dr. Grace Javier Alfonso's last day as Chancellor of the UP Open University. It brings up a lot of memories and stirs a lot of strong emotions.

It was around a year ago when I realized that I had only had a meaningful working relationship with one big boss my whole life. Of course, it's not that simple, given how the university is organized. I follow orders and requests coming from a number of people. But all of us ultimately answer to one person.

Immediately after earning my Master's degree in 2007, I applied for a job a second time at the UP Open University, specifically stating the office I wanted to be part of. Unfortunately, it seemed that they didn't want or need me. That would have been the end of it. But another office picked up my application. They had other applicants to consider, who were either more experienced, or more gifted than I was. But even though I was at the bottom of that list, they stuck with their decision to include me all the same. That is why I am eternally grateful to Dr. Alexander Flor and Dr. Melinda Bandalaria and I will always be loyal to the Faculty of Information and Communication Studies.

Of course, I am also grateful for Chancellor Alfonso for allowing FICS to proceed in taking me in. It was definitely a turning point in my life. But it was her role in my life milestones later on which I will always credit her the most.

It would be nearly a month after my first day on the job when I finally met the big boss. I was at the UPOU Faculty Room in my little cubicle minding my own business, or more accurately, trying to look like I was busy, when she went in and proceeded to the next room, where the senior faculty members' desks where at. She went to talk to my Dean, Dr. Flor. When their discussion ended, he officially introduced me to her, and I will never forget her first words to me, as she looked at me with a smile.

Of course, the best I can say is, sige lang po! But I was really thinking something along the lines of, oh shit, there goes my plans for a quiet career as a junior faculty...

I had no clue as to what was in store for me.

It wasn't long before I found myself sitting on an honorary seat in the UPOU Chancellor's Advisory Council. I was barely 30 years old straight out of grad school and being asked to either provide advice, or worse, actually make major decisions on how to run a university I barely knew from the inside. I thought it was a great honor to be entrusted with that power and responsibility. Then reality sank in.

It was difficult. Overwhelming. I had wanted to quit. Several times. You had to understand that this was before the UP Charter change that ushered in the new salary rates that UP faculty enjoy today. Had I not been single and living with my dad, I'd never live a life I wanted on my own with that salary. The administrative work that was the source of huge amounts of stress provided a monthly honorarium that would not even be enough to pay for a day of confinement in the hospital when I eventually broke down due to stress.

It just wasn't worth it. I had found a passion for teaching. But I could barely live with the other responsibilities that were tied in with being a teacher at UPOU. This negativity was compounded by the realization that even though I did as much work as the other mid-level managers, I did not receive the same benefits they had. For a time, I regarded myself as the lowest paid IT manager in the country.

Two years into the job, I finally said to myself I have had enough. It was also not helping that I was struggling to move on from a failed long-term relationship. So, I built the nerve to walk into the Chancellor's office to ask that I be allowed me to resign. At the very least I was going to negotiate that I be relieved of my administrative duties that had helped destroy my self-confidence and brought me on the brink of depression, neither of which anybody really knew about.

I barely held it together in front of her as I tried to plead my case. Although I managed to not break down crying, I almost couldn't talk anymore and felt a tear could fall any moment.  It didn't, but that moment of transparency was not lost to the Chancellor, who almost cried herself (yes, that's how she is). But she didn't let me resign. Yes, on paper, she did cut my administrative load in half. But in practice, I still ended up keeping most of my original responsibilities. There was, however, something more profound that happened for me that day.

The Chancellor believed in me, even at a time when I didn't believe in myself. That meant everything. I was dissuaded from quitting. So, with that no longer an option, I focused on finding ways to stay without burning myself out and running myself to the ground. Even though my desire to work at UPOU wavered, I had become intensely loyal to the person who ran it. Validating her faith became my mission. But not too much, I guess. I was still pissed about the lack of compensation.

I would like to believe that I had started to achieve that validation in 2013, when she asked me to run my newly re-christened office formally as Director, with all the benefits befitting the position. I was a little surprised. I can imagine that she didn't have a lot of options back in 2007. But it wasn't the case anymore at that time and I was getting ready to give way to whoever becomes the lucky guy or girl that receives the perks of being a Director that I had wanted for myself. I even told her as much. She already had younger and brighter people to work with. Then she asked me that question.

Oh, I had at least three names I can give off the top of my head. But I stopped short of mentioning any, just as she probably knew I would. They were just that -- young and bright... and green. Perhaps even more so than I was when I started. If I were to recommend one of them, I'd sentence him or her to the same thing I went through for the past six years. It felt like she was giving me a test of character. Or perhaps she just knew exactly how to corner me. After all, there is a good reason why it's damned near impossible to say no to Grace Alfonso. She was also on her third and final term as Chancellor. I think she would largely prefer to stick with battle-tested people which she had built trust with. This belief made this request an honor for me. So, of course, I accepted. I still didn't like the job. But aside from the familiarity over it, I was already stronger, thicker-skinned and perhaps most importantly, had the maturity for it (barely). The perks were just icing on the cake. The real reward was that sense of self-validation that took a long time to earn. 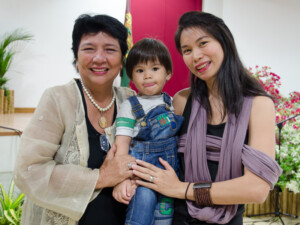 Ma'am Gigi had a profound effect in both my professional and personal life. It makes me wonder how differently my life would have been (or if my son would even have existed at all), had she not make me stay at UPOU.

Ma'am Gigi turned her responsibilities over as Chancellor earlier today. My own appointment expires a few months from now. On two separate instances, I hugged her and said thank you. But I don't think those two words muttered twice would be remotely enough in making her realize just how much I owe her and how much I appreciate her faith in me and how I cannot imagine how my life would be right now had she not let FICS take a chance on me and more importantly, if she had let me quit that day in her office.

This site uses Akismet to reduce spam. Learn how your comment data is processed.